Learn
/
NFT Culture
/
Are NFTs Bad for the Environment?

Are NFTs Bad for the Environment? 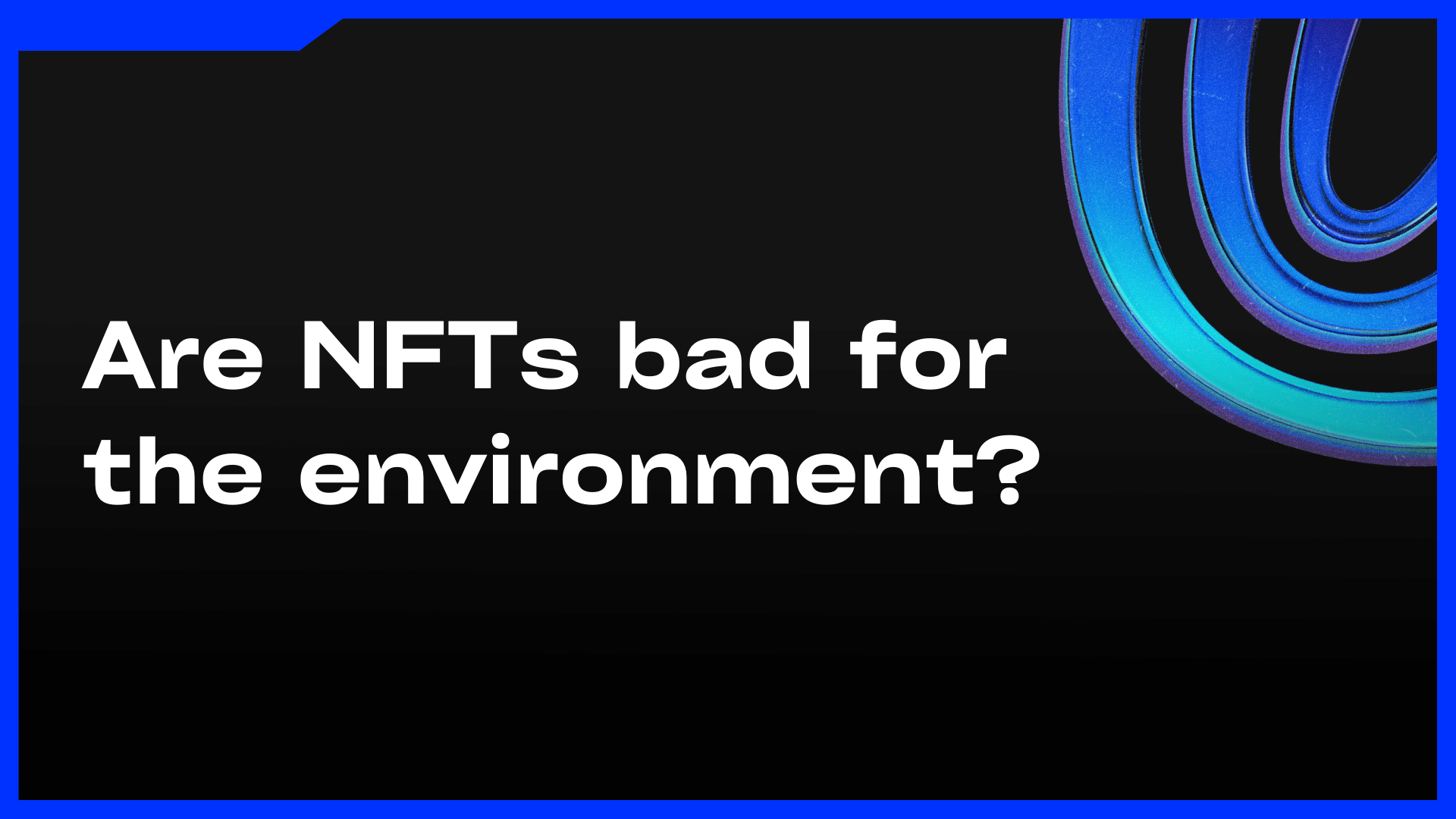 NFTs have been criticized for many things, one of which has been their impact on the environment; read on to find out if NFTs are actually bad for the environment.

Intro: Are NFTs bad for the environment?

At such a critical time in the history of humankind, when we are running out of time to prevent more climate disasters from a warming world, this is an important question to ask ourselves about a new technology. Read on to find out if NFTs are actually bad for the environment.

Why do people think NFTs are bad for the environment?

Critics of NFTs highlight that it takes large amounts of electricity to create an NFT. Most NFTs are minted (aka. Created) using a proof-of-work method. This proof-of-work method is put in place to deter malicious behaviour and was originally developed in 2004 as a way to secure digital money. Bitcoin was the first well-known technology to use this proof-of-work mechanism when it was created in 2009.

Following the creation of Bitcoin, other cryptocurrencies also followed its lead in using proof-of-work as the way to provide secure, decentralized consensus on the blockchain.

Proof-of-work requires members of a network (i.e. computers) to solve an arbitrary mathematical problem to prevent individuals from gaming and system. Proof-of-work led to the rise of cryptocurrency mining because miners receive cryptocurrency rewards for validating transactions and mining new tokens on a specific blockchain.

It’s due to the work of these miners that transactions can be processed in a secure peer-to-peer manner without the involvement of a third party. However, as miners solve these arbitrary mathematical problems, their computers consume a high amount of electricity. In essence, the method that blockchains use to keep their transactions secure from hacking and tempering is also the root problem that environmentalists blame for its negative impact on the environment.

So…are NFTs bad for the environment?

NFTs can be minted on several different blockchains. The most popular and widely-used blockchain for NFT creation and transactions (ex. sales, transfers, storage) is the Ethereum blockchain, which uses a proof-of-work mechanism similar to Bitcoin.

This means that every NFT transaction conducted on the Ethereum blockchain uses more than 260 kilowatt-hours of electricity, the equivalent of electricity used by an average American household in 9.05 days. This transaction also emits almost 150 kilograms of carbon dioxide, which is the same as watching almost 25,000 hours of YouTube videos.

In this way, NFTs minted on the Ethereum blockchain do have a substantial impact on the environment due to the large amount of energy it consumes. However, Ethereum is planning to transition to a proof-of-stake operating method in September 2022 which will drastically reduce its energy use. This reduction is because proof-of-stake doesn’t use extensive computing to secure blockchain transactions, and instead rely on a network of validators who stake their cryptocurrency holdings instead of solving arbitrary mathematical problems.

Ethereum, although widely popular, is not the only blockchain that NFTs can be minted on. Solana, Algorand, Cardano and Tezos are other well-known blockchains that were designed to be more environmentally friendly. The Solana blockchain supports large NFT marketplaces such as Magic Eden and Solanart while Tezos supports Rarible.

For environmentally-minded folks who are also interested in NFTs, there is no black and white answer to the question “are NFTs bad for the environment?”. While some blockchains use the energy intensive proof-of-work method to validate their NFT transactions, there are other blockchains that use the more environmentally friendly proof-of-stake method to provide the same type of security.

For the most popular blockchain for NFTs, Ethereum, it’s predicted that its energy consumption will drop by 99.95% after it switches away from a proof-of-work mechanism in favour of the proof-of-stake mechanism in September 2022. This means that the majority of NFTs will soon become much more environmentally friendly. And there are always blockchains that were created from inception to be green, such as Solana and Tezos.

How do NFT Creators Make Money?

Get In-depth Web3 and NFT insights weekly.
Subscribe to our newsletter

Thank you! Your submission has been received!
Oops! Something went wrong while submitting the form.

Get a latest news when it’s available in your country .

Powerful tools for web3 creators
and their communities.